Almost 2 years ago, this video was picked up by the local blogs and had its 15 minutes of social media fame before passing the baton to the next flavor of the week. It was the first time I had ever heard of the Palmyra. How did such a magnificent time capsule go unnoticed? Was I the only one who didn’t know Baalbeck had more than Roman pillars, sfee7a, and the summer festival? Even with my insatiable curiosity, I’m also guilty of ignoring what we collectively take for granted but usually of being oblivious to the existence of these treasures altogether. After passing through, I know the title of that video is off. Palmyra isn’t the hotel that time forgot, it’s the hotel that the Lebanese forgot. Time is a permanent tenant there.

Whenever I venture outside my bubble, there is a closeness among strangers that I have only seen in this country with no degrees of separation. Before my group headed over to the temples, we discovered that one of my fellow explorer’s grandfather was a manager of the hotel for 25 years. Somehow, residents of Lebanon have a backlog of each others’ stories as if they are common knowledge. Google searches are unnecessary when you have updates flowing across seas and digital devices. The question, “wein sar?” is for the analog Newsfeed, the oral source of the whereabouts of people you once knew yet still know. Upon hearing of my plans to drive up to the city of the sun, I learned all about the Husseinis from dad before even getting in the car. He and his brothers were school classmates with the Husseini brothers. Baalbeck, like Tripoli, is dissociated from Beirut to the extent that Beirutis could mentally categorize it as a city in another country. This is why I find these overlaps to be humbling: we are not as separated as we try to be.

“But I don’t know Rima Husseini though. She must be Ali’s wife.
He’s the one who bought the hotel back in the 80s.”

After I tell Rima, it’s confirmed to be true. But she’s not just Ali’s wife, she also happens to be a university professor of Cross-Cultural Communication & Conflict at LAU. She talks about the hotel and I recognize snippets from interviews she’s given with international publications. Romantic one-liners aside, what I admire is the fervor she has when she speaks about gender roles, the patriarchy, and internalized misconceptions about Baalbeck although she is not originally from there. She’s like the aunt who you hope is coming to the family gathering so you can have Turkish coffee and complain about your dad’s archaic overprotective ways. Her energy is ineffable.

Baalbeck is home to ancient temples of Bacchus, Jupiter, and Venus. When fit into the ethereal narrative of the Heliopolis, the hotel is a contemporary ruin in itself. According to Al Jazeera, “The Declaration du Grand Liban – which established the boundaries of modern-day Lebanon as determined under the French Mandate – was signed at the hotel following World War I and the collapse of the Ottoman Empire.” Considering those who were guests there, it is stitched into the fabric of Baalbeck’s place in history. It has a twin in Athens just like our Bacchus Temple mirrors the Parthenon of the Acropolis.

Built in 1874, it is not a Hyatt but an overnight stay is equivalent to staying in an old mountain residence with loose doorknobs and antique plumbing. Ghassan Karaa, the concierge, is camera-shy which is a shame; I feel a strange familiarity to him because he reminds me of the grandpa I never met. Even the smell of the building reminds me of my jiddo’s home in the South. In early December, the cold isn’t piercing yet; it’s just enough to give you the sniffles while reading a book by the soubiya which has you going in and out of consciousness like a narcoleptic. You can go for a more expensive room in the L’Annexe, the renovated wing, but I felt that’d be skipping the entire point of staying at the Palmyra. And I’m not alone. I had thought that L’Annex was built to accommodate those who wanted an upgraded experience but Rima says it was so they would be able to renovate the pipes and heating of the original building while guests stay in L’Annex. They still haven’t been able to complete that though; visitors come for the real deal which keeps them from tearing open the walls.

Before going, as I was skimming article after article about one of the oldest hotels in the Middle East, the impression you get is that tourists are afraid to head inland to an open plain not far from the tumultuous Syrian border. However, when I asked Baalbeckis, I got the opposite opinion. Our temple guide, Mohamad Wehbe, said he gets mostly French and German visitors. Rima said the hotel’s guests are mostly foreigners eager to stay in the same place that saw so many royals of the past. It seems the reality is that tourists are the first ones who hop onto a bus to make the 2-hour journey up there from Beirut while it’s the Lebanese that are hesitant to challenge the reputation that anything beyond Aley is unsafe. Many factors contribute to this: the Syrian war, cars stolen and sent off to Baalbeck’s neighboring town of Britel, 4 or 5 army checkpoints, numerous Hezbollah flags, and sensationalized reports of feral hashish growers of the Bekaa Valley. But ultimately, refusing to break barriers is allowing this false association to persist, much like when Beirut is used as the West’s favorite synonym for a chaotic war zone. Our response to foreigners who fear our capital is, “visit and you’ll see what it’s really like” but we don’t apply that to ourselves when it comes to our own cities. In Baalbeck, if stones could speak, if temples could talk, they would tell you the stories of our people. Or you could go ask some of them that are still there.

The weekend we visit turns out to be the same weekend the hotel is exhibiting a collection of photographs commemorating the Baalbeck festival since its start in 1956. There are two older men, in their seventies, who have been working at the Palmyra since they were teens. Ahmad “Abu Mustafa” Kassab tells us how he witnessed it all, how he was there for all the big names we see on the walls in black and white. Ella Fitzgerald, Sabah, Miles Davis, Oum Kolthoum. Manhal “Abu Ali” Abbas said, while he was firing up the heater in my room after he brought me tea and cookies, that he has been at the hotel for 50 years. He had once tried his luck at joining the army but got rejected because of his poor eyesight. Had he been in the army though, he would’ve been sitting comfortably decades ago; however, he hopes to retire in a few years. Being a person who doesn’t know how to be pampered, I teetered between not wanting them to serve me and not wanting to offend them by rejecting their service. The dignity in these old men’s souls is palpable but they’re my elders yet pity would be an insult to all that they still give to this establishment. I was sufficiently awkward as I told him I hadn’t been to Baalbeck in over 15 years to which he retorted, “I haven’t been to Beirut in 15 years either.” He told me he’s only been 4 times in his life, that he doesn’t have work that calls for more frequent visits. 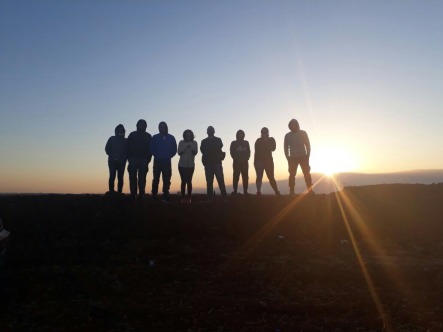 Watching the sunset over the valley, PC: Sarah Sharief

Abu Ali and Anthony, the grandson of the former Palmyra manager

Leila at the base of the temple.

The hotel’s name has its own layer of complexity. Palmyra translates to “city of palm trees” and is also an ancient city in present day Syria. Restoration of the temples there is being mapped out after most of the site was destroyed by ISIL in 2015. The palmyra is also a palm native to Southeast Asia where a tree deity linked to it is related to fertility. This was the name chosen for a hotel built by a Greek who saw the potential in a spot along the pilgrimage road to Jerusalem in the French mandate which was then excavated by Germans & Ottomans. For me, I see a parallel. The hotel is like Lebanon: an aging structure that is ignored, an identity that is multicultural with colonial roots, a place that is haunted by the memory of glory days that are no more. Its foundations need reinforcing but it is still open and welcoming to those who seek refuge. Rima tries to bring the Palmyra back to life, to show the world that the Palmyra had a fundamental role in the history of its surroundings, to keep the Palmyra breathing because it’s worth saving. She does this even when her own faith in such a fight falters. Rima is the youth of Lebanon. Rima is me. Rima is all of us who are still here.