As readers of El-Tanein Diet know, the Nike+ Run Club (NRC) runs twice a week from the Nike store in Beirut Souks every Tuesday and Thursday evening. However, what is not advertised on their flyers is the NRC-organized fun runs on weekends. I stress on the words “fun run” because the main point behind this group is to run for the sake of running, not for medals or podiums.

Leading the pack in this group of awesome folk is Mark Jibran, the NRC coach and all-around positive force of nature. Having a good coach should not be underestimated when it comes to sticking to a fitness regimen. If one’s trainer pushes too hard or doesn’t know how to motivate effectively, then they have failed as a trainer. What seems to fall through the cracks when finding a personal trainer or fitness advisor is not the reps or preferred activities used to get one in shape, but the personal approach they have while one is undergoing training. 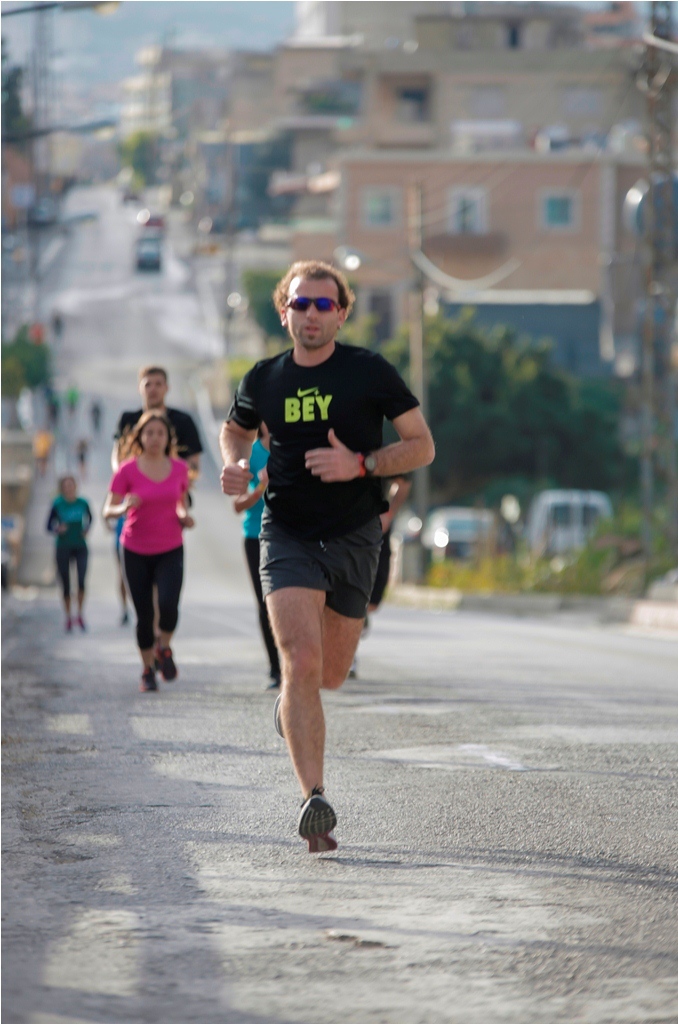 And that is where Nike hit the jackpot with Mark. He knows how to deal with people and he knows how to push without making you want to throw spiky pineapples at him so he’d back off.

For each coach, there is a pacer: Mohamad Marhamo. With M&M, the NRC is guided by two smiling and seasoned runners. We are pushed to keep running at our own best pace or, at the very least, to keep running. We are told how to stretch, how to stay hydrated, and how to exercise correctly. And if that wasn’t enough to convince you that they know what they’re doing, both are members of De-Feet Runners, a group of ultra-marathoners who run marathons back-to-back for 6 consecutive days to raise funds for charity.

Running with these two on the Beirut corniche will show you that this group truly does run BEY. Be it at 6am or 6pm, fellow runners all over the path call out a happy hello to M&M because they are deep-rooted members of this athletic community that is alive in our city. While the rest of us sleep in, these guys are out there enjoying the sunrise and serene calm that you rarely associate with our chaotic capital. By being part of this group and going for runs at the crack of dawn, I got to witness this spirit and, dare I say, be part of it even if just for a few instances.

For Valentine’s Day, we decided to take on the cultural port city of Byblos (Jbeil) for an early morning 10km run through the old souk and asphalt road to Amchit. On the bus there, while still trying to figure out how and why I was on my way to run on the morning of my 28th birthday, I was also debating how many kilometers I would actually do. The warm-up was set at 2km so that was the minimum but where would I stop? I’d done 10km in the Beirut Marathon but that question popped up, like it does before every NRC meetup, do I feel like it today?

At every kilometer, my mind would ask, “are you ready to turn around?” But as I neared the halfway point where M&M were waiting with water, I had other NRC members making their way back and cheering me on. So I thought, “yalla, another kilometer and then you’ll stop.” And that’s how it went on until I did the entire 10. I did it thanks to their cheerleading combined with my mind not wanting my body to succumb to being closer to the age of 30. HA.

I was never a runner. Hell, I still don’t think I can call myself one. But maybe, in the future, with the help of NRC, I will be.

One thought on “Nike+ Run Club: Byblos was our Valentine”