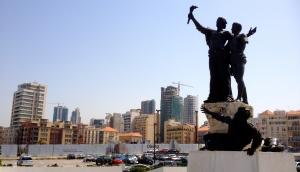 Leah Dieterich’s book “thxthxthx” and website of the same title encourages giving thanks for all things in life (even tote bags) in the form of little scribbled thank-you notes. It’s just more evidence of how much a shift in perspective can change your whole mood and how you see your surroundings. In Lebanon, we tend to focus on the negative because, let’s face it: there’s a lot. However, in the spirit of Thanksgiving that falls on the same day as Independence Day, here are 10 Lebanese things that we should be thankful for:

With some time, your close friends’ mothers with eventually adopt you. They will overfeed you, tell you to borrow a jacket when you forget yours at home, and lecture you when you get your first tattoo. They will say things like “yiii shu mahdoumeh/taybeh/jou3aneh” and ask about all your family members because they have now become a part of your family too. And in your silly attempt to win over Mommy #2 because you want her to think you’re an angel and a very good influence in general, you will playfully tease your friend (her child) on their shortcomings and laugh together in slow-motion while “A Wonderful World” plays in the background. Your friend takes no offense because they know you’re putting on a show and they’ll return the favor next time YOUR mom makes peach cobbler.

Your great aunt wants to know why you’re applying to jobs overseas and your uncle doesn’t understand your logic when it comes to your personal life or why you refuse to tell him about it at all. Your teta is in a class of her own. This lil’ old lady will cook you a whole tray of kibbeh bil forn just to lure you over to her house because you’ve been so “busy”…going to the Alleyway in Hamra. She will ask you what you’re doing at university now, when you finish, and when you plan on making babies with a good catch from the village. There are only two majors: medicine or engineering. To Teta, if you studied anything in the sciences, you’re becoming a doctor. If you studied anything in design or architecture, you’re an engineer. All other majors mean that you are expected to start your own business. Regardless of what you’ve studied, a wedding should happen before you’re 30 or this woman is going to set you up with your cousin. Don’t get mad, she just wants to see you happy. And pregnant.

These guys can be jerks but sometimes you get the super cheerful ones who think up new ways to say “Good Morning” to you everyday. That, or they compliment you in Egyptian dialect that you hardly understand so you just smile and walk away. Ten minutes later, you realize that when you thought he was talking about your green eyeliner, he was actually saying a navy blue car left a scratch on your fender while backing out the night before. Shit. You have to be nice to these guys because you will end up needing to park there again at some point in your life and you don’t want there to be bad blood between you. Even if they probably played Rush Hour as a kid and can arrange the lot like a labyrinth from hell, swallow your pride and just be honest when they ask you what time you’re leaving. They’re protecting your car from the evil meter maids and valets that sweat all over your armrest.

These guys all have mafioso names in my head. Typically, they’re on the plump side and wear suits and manrings; they look like they retired from the Gambinos and now run a respectable place dedicated to serving food to the familia. They’ll fit you in if you’re regulars and treat your dad (or whoever the alpha male of the table is) like he’s the Boss. Best part about these restaurants: puffy pita bread, the fresh bread you get that’s inflated like a balloon and crispy right in the center. Perfect for scooping hummus or soaking up the tabbouli sauce because you left it on the wrong part of your plate. You get a whole endless basket-full too.

When the electricity cuts, you are dependent on generators, UPSes, or the battery life of your electronics. Since we’re skilled long-distancers, you end up chatting in a group convo with people all over the world and a game develops in the midst of a weird conversation. A current favorite is “Indie Rock Band Track Titles” which started off with one friend suggesting a bunch of music that sounded like made-up songs but were real. The replies to her suggestions were invented titles for bands and tracks which developed into a cycle of useless creativity culminating in a full soundtrack along with album cover art (photographs of items near us that inspired titles).

Your batteries run out and then you have to spend time with REAL people. If we didn’t have electricity cuts, we would remain in our technological bubbles instead of spending time sitting around the kitchen table with your sisters staring at the walls and discussing why pumpkins are orange.

Even with 3G and DSL, our internet is still unreliable in comparison to the outside world. This is a blessing because if our download rate was actually acceptable, we’d be streaming every episode of every series 24/7 and downloading every album since 1920 onwards because piracy doesn’t exist. But, you know, we’re being productive on the side. If we already do this now, what would happen if YouTube videos actually played when you press play? How much work do you think you’d get done if “buffering/loading” never appeared on your screen? Unless you’re paid to do this, and thus have an amazing job and I want to be your friend, you will get nothing done ever.

Or if there are any, they aren’t enforced (like most laws here) so we get to benefit from a ton of free music and dirt-cheap DVDs of movies that aren’t even released in the theaters (because they take an extra month to get cleared or are banned). We get angry when we have to pay over $3 for a film that was released last month just because it wasn’t available at the other place. It’s even worse when you get home and find that it’s dubbed in Spanish and there are no subtitles or it’s one of those I-just-saw-a-guy-get-up-in-the-chair-in-front-of-me-and-I’m-not-at-the-movies copies. As for music, the CD section in Virgin Megastore should just be transformed into a skeet shooting range (yes, I can’t believe they’re called that too) because I don’t think I’ve bought one in the past 8 years.

The majority of the people you grew up with now live abroad or are planning on leaving within the next year. Reasons vary from higher learning to job opportunities to I-just-need-to-get-out-of-my-parent’s-house. It takes some time to get used to the country being an airport terminal at all times of the year, especially the last two weeks of December and the extended June-September window. However, you get to have friends all over the world so you have plenty of no-hotel-options when you want to travel for a break and there’s always someone awake to keep you company when you can’t sleep. Plus, you get to online shop and use their addresses for shipping. SCORE.

The salaries here make it harder for young people to be able to stand on their own. If they were to move out, they would have to pay for rent, utilities, and the meals they swipe from the fridge. Is it possible to do on a Lebanese salary? yes. Is it done? rarely. Besides the social stigma that accompanies young adults living on their own before marriage, it doesn’t make much sense to move into your own place and pay rent if your parent’s house is two blocks away and you can live there for free. However, this gives you the ability to save some of the cash you’re making since you’re not paying for EVERYTHING. Eventually, you should be able to live on your own especially if you can afford to throw away cash on booze, shoes or Black Ops. No excuses. We should be thankful for shit pay because it teaches you what you really should spend your hard earned cash on. And it’s not a pair of $800 peep-toes.

Actually no, this just sucks.

But mostly, we should be thankful for our schizophrenic patriotism.

We love Lebanon. We hate Lebanon. We complain about all its imperfections daily but preach about its awesomeness to foreigners. We tease each other for speaking different languages in one sentence, yet it’s a blessing to know more than one language to begin with. Our country is in debt, our infrastructure is always under construction, and our employable youth is our best export but it’s home. Our country isn’t special because of Jeita or Phoenician roots, it’s special because of its people regardless of who they are or what they believe in.

2 thoughts on “10 Lebanese Things We Should Be Thankful For”