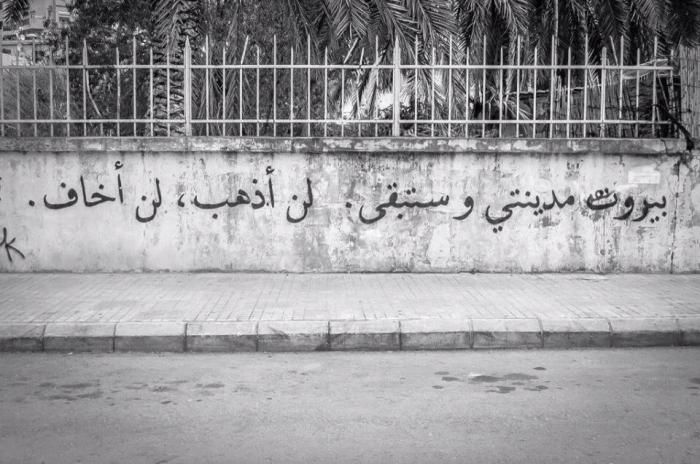 We have a movement of intellectuals who are capable of bringing solutions to a table that has been buried in problems; a group of 24 professionals who have managed to build a current that is flowing through the body of dirty water that is the Lebanese political world. Could it be? Could this be the start of a change that could become contagious? Did dad just say he wants to create a “Kfarkila Baldati” list for our village in the South the next time elections come around? It won’t work. We’re the Bernie Sanders of this tragedy. As in, the guy that should win but will end up having to grin & bear it as his opponent takes the stage waving like the one beauty queen who isn’t endorsed by Trump. Being what the country needs isn’t always the winning strategy when it comes to politics.

Friends saying they can’t volunteer because of lunches in Sour, late parties in Hamra the night before, or my favorite one: ma ili jleideh. Pictures of sunbathers and brunching babes who will complain about the smell of garbage when they go to Sporting for Decks on the Beach or nag that Beirut has no parks like the ones in [insert any country here]. The lowest percentage of voters in the history of Beirut Municipality elections. Barely 20% after 12 hours of open polls. I dropped my first uni course (Physics 204) when I got the same grade on Quiz 1. It was a lost cause.

Maybe I could’ve done more leading up to this point? Maybe I should have moved my legal residency to Beirut so I could make my vote count where it could do the most “damage.” Am I not calling enough people? Am I not convincing enough when I ask them to donate a few hours? I should’ve practiced my Arabic handwriting before today. Why have I never heard of half these schools? The thought process throughout the day doesn’t come close to the thoughts that have infected my noodle for the last few months. Those of jaded disgust that couldn’t point me in the direction of any bright sides to staying in Beirut. The BEY cheerleader in me was 12 steps away from a 2007 Britney meltdown before whipping out the US passport escape kit. But then that thought that is the loudest in these situations always seems to snap me out of it: do something or shut up. Being on call center duty for 13 hours is a tedious job but it’s one day. One that could change everything. Not such a sacrifice when you think about the days you’ve wasted on Netflix benders that did nothing but sentence you to more cardio at the gym that following Monday.

When salaries and cost of living are so disproportionate, you almost can’t be angry with people accepting payment in exchange for votes. You can understand the need for immediate monetary rewards when you have generator bills to pay, mouths to feed, and face masks to buy. Not every voter has the luxury to think about the future, they only have the capacity to think about the month ahead. The dynasties still hold the power and run the show. The corruption is deeper than our aquifers that will be drained by our neighbors while we’re busy backstabbing each other. Your friends didn’t vote, the Facebook feeds lied. Voter fraud, ballot tampering, and bribes. Beirut Madintak/tik but apparently a year in filth, two without a president, and almost three decades of Berri are NBD. Another 6 years of the same sexy faces that grace our television screens every night ain’t no thang. The doubts rush in. The haters who told you it’s all useless were right: hayda Libnein.

We did not fail. Yes, we don’t need another downfall or reminder that our system is broken. What we did need was a reminder that we have the power to fix it. The people busting their butts because of what Beirut Madinati showed them in the last few months is anything but that of failure. Change is already happening.

When you have an office full of non-Beirutis volunteering to call random numbers for +12 hours, then you know that you’re surrounding yourself with the right people who want what you want. When you manage to get 81-year-old Souad and her 89-year-old husband Fouad down to their voting station in Charles Helou all the way from Beit Chaar 15 minutes before voting closes, after Souad refused to go especially without Fouad, then you know that you’re creating change. When you reach voters through those phone calls who tell you that they brought the whole family to the polls and are almost insulted we even asked if they voted yet, that they’re grateful that Beirut Madinati gave them a reason to vote at all, then you know that maybe the fight isn’t over. When you’re reunited with ethics professors, high school friends, and activists that you run into at all social happenings, you know that your city is still cultivating strong minds and that ب in the logo isn’t just a frozen symbol, it’s a fucking beating heart. When you have a father telling us younger volunteers that we’re witnessing history, then you know you’re not a naive fool to believe your work could reignite the embers of hope that are dying out. When you hear volunteers say that there was no need to explain who Beirut Madinati were because the people on the ground knew, you know that the message being spread had moved offline. When your social media feeds are filled with first-time purple thumbs, then you know that you can keep dialing, keep smiling, and keep crossing your unstained fingers because there are fellow citizens who are thinking about their Beirut, not their botched Sunday caught in election traffic. There just wasn’t enough of them.

BM supporters, please know that what you were campaigning for was something that the people need but they’re not able to take the reins yet because “democracy” has failed them so many times before. They don’t think it even works. But, for once, we all did not surrender to apathy, stagnation, and intimidation. That alone is a victory. That alone is a start. This battle may have been lost but next time, we’ll win the war. And we don’t have to wait 6 years to do it.

2 thoughts on “Beirut Madinati: The 5 Stages of Election Day”