And so the last two weeks of 2015 and the first of 2016 brought about a failed routine and an attempt to return to one. Signing up with a new gym during the month of Christmas dinners and expat gatherings may have been a mistake but it does spare me from being the among the January New Year’s Resolution members. At least I feel like my fitness goal was not brought on by 12 months of guilt and too much turkey.

Another lesson learned during this return to normalcy was that running with NRC has been positively affecting my stamina without me realizing it. Of course, I only realized this after missing two runs (thanks to the holidays) which resulted in tense muscles and needing to restart my slow but steady progress. I also learned that running with a group is more motivating than when using a treadmill. The comparison between my cardio runs at the gym and the ones done down the Beirut Corniche shows me that I can move faster for longer periods of time when I’m with people. And I do it without the help of music.

NRC runs have been the outdoor activity every week. The weather isn’t in my favor when I want to voluntarily decide to be sweaty outdoors but it’s been okay as long as it’s dry. I’ve made a pact with my posse to jog together every Sunday in hopes that we will motivate each other to make healthier lifestyle choices. Here’s to hoping we stick to this agreement. 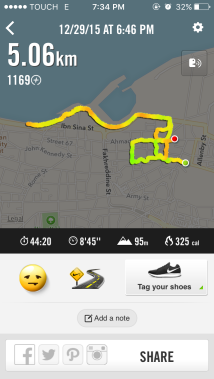 Best Meal(s) of the Week(s)

Christmas week’s meal would have to be my friend’s mommy’s paella. While in Barcelona, I only had paella once because I felt like I’d be betraying my auntie. Her paella is the bees’ knees.

Other great meals consist of chicken strips and salads at Roadster. I have missed our little Beirut-bred diner.

Getting the right gear: My shoes, which I used for classes and training, were causing blisters and giving poor support when used for outdoor runs of +5Km. I have since upgraded to Nike Vomero10s and feeling has returned to my shins. This post isn’t sponsored by Nike – after all, I don’t ONLY buy Nikes. My love of sneakers doesn’t discriminate. My old shoes were a pair of Nikes but they weren’t the right ones for me or my activity. I was advised by my running buddies that the Vomeros give the best support for what we do so I invested in a pair to avoid further injury. Never underestimate your comfort during a workout. This extends to your clothing as well because you have to feel good about yourself when working out so you keep doing it.

Love/Hate Relationship with Expat Season: It’s so invigorating to see the city filled with people your own age again. It gives you an idea of what it would be like if our youth felt like their own country could give them the opportunities and salaries they deserve. It also shows you the kind of traffic and hectic schedule you would have to maintain if everyone you loved were suddenly in the same area code.

Workout Track of the Week(s)

Do I really need to justify this? This is the song I wait for at Grand Factory. It or anything Kanye. Clearly if this jam can get me grooving on the dance floor, it will get me moving at the gym.

Cheese of the Week(s)

Between having a cheese & wine night for NYE and trying Beirut’s Cheesecake Factory, 2016 has already seen its fair share of cheese so let’s get really uncomfortable.