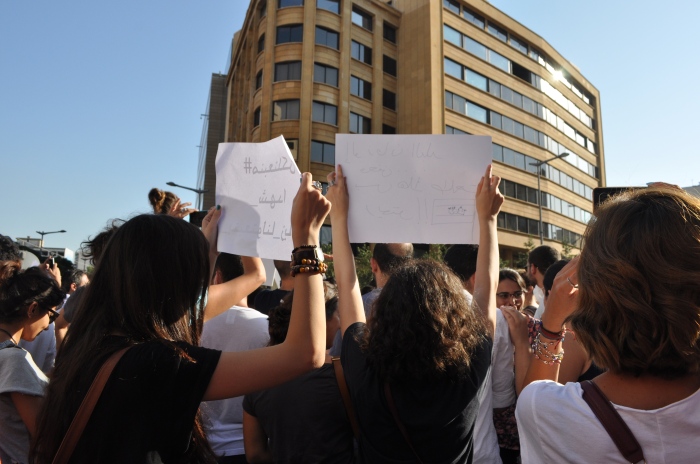 It’s ironic that in mob movies, members of the mafia use “waste management” as their cover when asked what they do for a living. Here, our mafia of politicians also has nothing to do with waste management. As has been the trend, whenever there has been an injustice in our society, a Facebook event pops up announcing a march against it. After the garbage fiasco this past week, an anti-corruption demonstration was planned for Saturday afternoon (yesterday) in front of the Grand Serail in Downtown.

I’ll admit that I haven’t gone to every protest but I felt like it was my civic duty to be present at this one in particular. If I didn’t go, I was a fraud: a hypocrite for not practicing what I preach. In essence, our presence at every march is necessary – we need to stand together when any member of our community or any issue that affects it is being defended and/or highlighted. We need to unite as a common front otherwise we are the ones to blame when our rights are violated or our politicians make poor decisions on our behalf and we quietly accept them. You have to take responsibility for your part of the equation before blaming others or authority. That also applies to the issue of garbage collection. As one citizen was saying at the protest, “this is our trash, we should sort it.” It is the country’s duty to collect and dispose of their people’s waste, but it’s the people’s duty to reduce their individual contribution to it. Once you do your part then you can be angry for them not doing theirs. It’s also about taking responsibility for putting such people in power and then suffering the consequences of our own votes. What’s done is done though so let’s deal with our present situation.

I’m glad there was a demonstration. I’m amused when, after bumping into a friend there, she told me, “it’s my first mouzahara.” It was admirable to see people bringing their children there, exposing them to the issues that should be fought for instead of surrounding them with sectarian rhetoric. It was good to see the faces I see on Facebook, the ones who write about the problems, also there in person. It was great to see Lebanese flags, no party colors. It was commendable to see a peaceful approach to getting our voices heard. Who was listening though? The crowds looked indistinguishable from the ones at our summer street festivals and that’s what seemed wrong. I wanted more anger. I wanted more people. I wanted more alternatives presented for what happens once everyone goes home. Without a long-term plan, will there be change?

I went to yesterday’s protest knowing that it would either inspire or disappoint me. Sadly, it was more of the latter. I admire the activists that organized it and took action. Enough complaining without movement. But while standing there, I was surprised that there weren’t more people, that the ones there weren’t furious, and that the general consensus of the older generation was a pessimistic “what’s the point?” 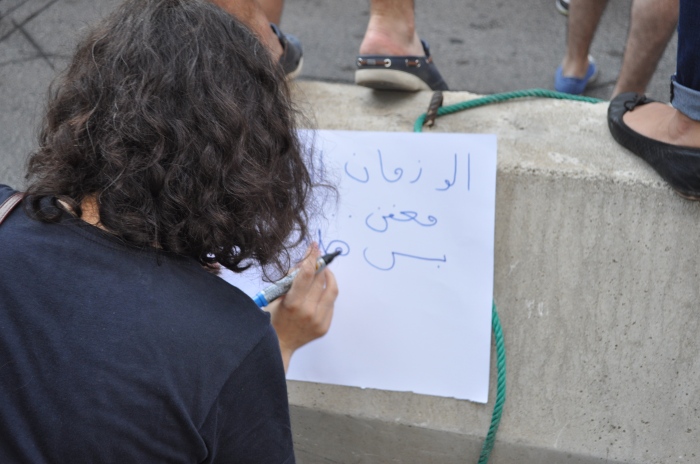 Last night, I returned to Beirut from Broumanna and, from that altitude, there was a very visible gray cloud suffocating the entire city and we prayed that it wouldn’t rain. Driving (or diving, I should say) into it, the streets were a post-apocalyptic scene of burning dumpsters and filth.

The solution that they came up with yesterday post-protest was new landfills in new locations. But the people aren’t standing for it. Jiyeh residents have closed down the highways to South Lebanon because they don’t want to be the next Naameh. They may have inconvenienced a lot of people heading to/from the South today but they have every right to say no to a decision that will inconvenience them with a nation’s trash for an undetermined amount of time. We cannot let those in charge think that these “solutions” work. After seeing how they handle such crises, I wouldn’t want the trash moved to my backyard either. We have to reject this solution before it’s too late…again.

2 thoughts on “Saying No to Temporary Fixes”