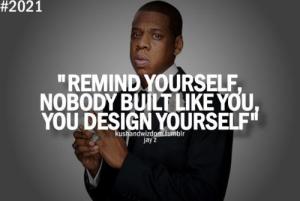 [And I mean that especially now – girl, I ain’t after your man. I just want to be part of your clique because you guys are the most stylish power couple with business brains. You also are smart personally – I mean look at Ye and Ri – they don’t know what they’re doing with their love lives. Be, I respect that you admitted to your lip-synching at the inauguration because Barack is your boy – you can’t let him down.  I also respect that you are the right match to Jay, equally pulling your weight financially and, probably, physically. Really, your monster thigh muscles scare me. Have no fear, I am not a threat even if I’m a white Arab chick from Beirut. Since we’re talking like this, I just have to say “Run the World” was just another single that followed the whole independent-woman streak you seem to fall back on too often and you can do better. You don’t need it, you’re BK from Texas.]

So Jay, as I was saying, I admire your ability to shift into many different realms of creativity. You’re a chameleon, while seeming totally down to earth, you are effortlessly suave, just a very cool guy who happens to have a net-worth of $500 million. And I don’t mean I’m after your money. I mean you are successful. Ambition is a quality that I want in the people that I surround myself with. Ambitious people give good inspiring energy.

Musically, don’t get me started. The Black Album is one of my favored LPs but the fact that you can make mashups with Linkin Park and Dolly Parton sound good separately – now that’s saying something. Then you go and work with JT and Timbs. YES. “Decoded” is a beautiful publication by the way. I was skeptical because that Nets logo was average, but the book is lovely. Your affection for your wife and family (blood or otherwise) is admirable. I don’t care if it’s publicity like that subway stunt with the grandma – I grinned like a buffoon – it’s good to see.

So what’s the initiation process to be an intern? Or just shadow you so I can soak up some residual awesomesauce? Do I take S-A-Zs? A test of 99 problems? Just grant me a moment of clarity to know what it takes. Ladies is pimps too but I won’t be standing at the “tabownacle” forever.

One thought on “Jay-Z, Will You Be My Valentine?”