As requested – shout out to Jade S, Bahij K, and others who asked for a part 2 and made suggestions.
Here’s the second installment to Lebanese Drivers: 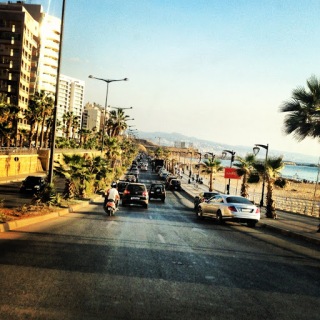 They are good drivers with bad luck. They are “accident prone.” They have totaled 2 cars in the span of 4 months but it’s totally not their fault. What do you mean yellow means slow down? What do you mean you want to wear a helmet while I drive? Good news is they’re a great reference when you need a rental; they’ve tried out most of the cars available because their ride is always in the shop.

They pick their nose, digging for kousa, while thinking they are discrete and stealthy. They be like “I think I’m invisible as I pick my nose on the Manara sea-side road in my fancy tinted car, but my window is cracked enough so you can actually see me. THEN I’ll roll it down some more and ask for your name, ya gameel.”

Apparently, not everyone has heard the saying “don’t eat a banana in public.” Eating a baguette sandwich or licking an ice cream cone one-handed while trying to keep track of the traffic never looks right to other people nearby. The very skilled Schumachers are those who scarf down a shawarma djeij from Arax, simultaneously holding a pickle, sipping on a diet coke, and controlling the wheel with their knees.

They cut someone off, block their right of way then proceed to stare them down for 7 seconds flat, the same amount of time that any Sean Bean character spends on screen. This all seems to happen in slow motion because it is happening in slow motion. They will not just make a u-turn from the far right lane, but they will melt your soul on the way just because you dared to drive on the “right side” of the road.

They travel in packs, these “security forces” motorcades. They think they’re entitled to the road as they aggressively honk and signal that they need a clear path. But when their high-beams flash and their monster trucks charge at your slightly small sedan, only one thought comes to mind that could describe what the B-SUVs are and Michael in My Best Friend’s Wedding said it best, they are “the pus that infects the mucous that cruds up the fungus that feeds on the pond scum.”

They pick people up, drop them off, and are a key component in all roadtrips. The only thing more unfamiliar than the idea of being a passenger is the idea of being alone in the car. They are better than a Google maps directory when it comes to friends’ addresses and their gas bill would make Carlos Slim cry.

They are a member of the Police force and are thrilled they get to ride around in a Dodge Charger that was donated to them by the US Government. They sometimes forget that they are a member of law enforcement. Let’s just leave it at that.

They are financially blessed. Or their parents are and they’ve been spoiled with a shiny new toy. They roll around in their most-likely Italian suede-interiored beauty, have valets park it in front of restaurants, and maybe, just maybe, have furry dice hanging from the rearview. Oh, they be so loaded with money. Until their allowance runs out and they live off of falafel sandwiches for 4 days straight.

New drivers. They are too afraid to move at a normal velocity because that would mean that they were embracing the beautiful technology that enables them to get to a destination without walking for 83 hours. They learned how to drive in a manual Datsun with a broken AC in the middle of July, it is expected that they would be more badass in an automatic. Alas, the speed of their vehicle is equivalent to a sloth on hash.

Most likely driving a used car bought by their parents. It’s their first car and the love of their life…until, 5 years later, it has electrical problems, pieces falling off the door that are popped back into place like a dislocated shoulder, and throws ignition tantrums by refusing to start because they called her “wheezy” after the engine began to breathe like that guy who loves Helga. They have been driving it since their first year of college and should probably trade it in before it’s worth as much as a karaoke machine, but they don’t want their parents to pay for another car. They then move to a new city that has a fully functional metro system. Or they buy a bicycle.

Some of the above terminology is Lebanese slang and has no English translation. My apologies.

NEW: Like Bambi’s Soapbox on Facebook to stay up to date on new posts and funky finds.

One thought on “10 (More) Types of Lebanese Drivers”