I’ve decided that bunching the ETD posts into 2-week bits is better while I’m in Barcelona. Main reason being that I don’t have a lot of activity to report other than walking all over the whole city. I do plan on changing that up but I don’t want to get too repetitive and only be discussing what I’m eating. Although they come hand in hand when focusing on fitness, this is supposed to be a series about movement rather than a tribute to food.

Walking my ass off for 14 days

Still can’t get myself to give up my morning walks to the office and I don’t think the rain will stop me either. It’s a 15-20 minute warm-up before I sit behind a screen for 9 hours. I’m really happy that I have this to wake me up prior and then after the day is over as well. Sedentary life at a desk can be so damaging so it’s become the highlight of my weekdays. I try to change up the route every once in a while so I can discover a new neighborhood, find another farmacia, or fit in some extra steps.

With that said, I’m still hoping to get some weekend jogs in. Since weekends are the days I get to really be Bambi the Explorer, I can’t help but deplete my energy wandering the streets looking for hidden gems. I’m trying to use the resistance tube regularly but that’s been as effective as my Duolingo Spanish lessons – meaning I’m doing it twice a week max. Catalan bread is still stalking me and now I’m crushing on its friend: bizcocho de limon (lemon cake) from Dia supermarket.

See above or below.

Best Day. Taken from the Apple Health app because I forgot to charge my Fitbit again.

I’m doing an average of 10.5km/day when not in the office so week 10 was ~78K and week 11 was ~75K steps. Even though this is higher than my Beirut weekly stats, the totals have gone down since weeks 8 & 9 so I should get back to my old weekend numbers.

Best Meals of the Weeks

Week 10: Bresaola with cava from El Jardi in Raval. It’s a charming tapas bar located in the gardens of old Hospital Santa Creu, around the corner from the famous La Boqueria. It was one of my first solo lunches and I didn’t mind one bit. 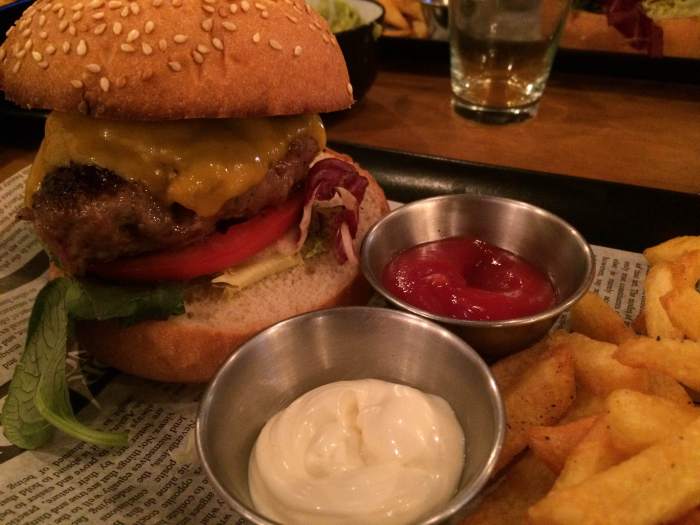 Week 11: Media Pinta BrewBurger with a 1/2 pint of 5am Red Ale beer at Brewdog on Carrer de Casanova. After nachos, a burger, and brownies, my new colleagues and I played two rounds of Jenga. We defied the laws of physics and digestion. 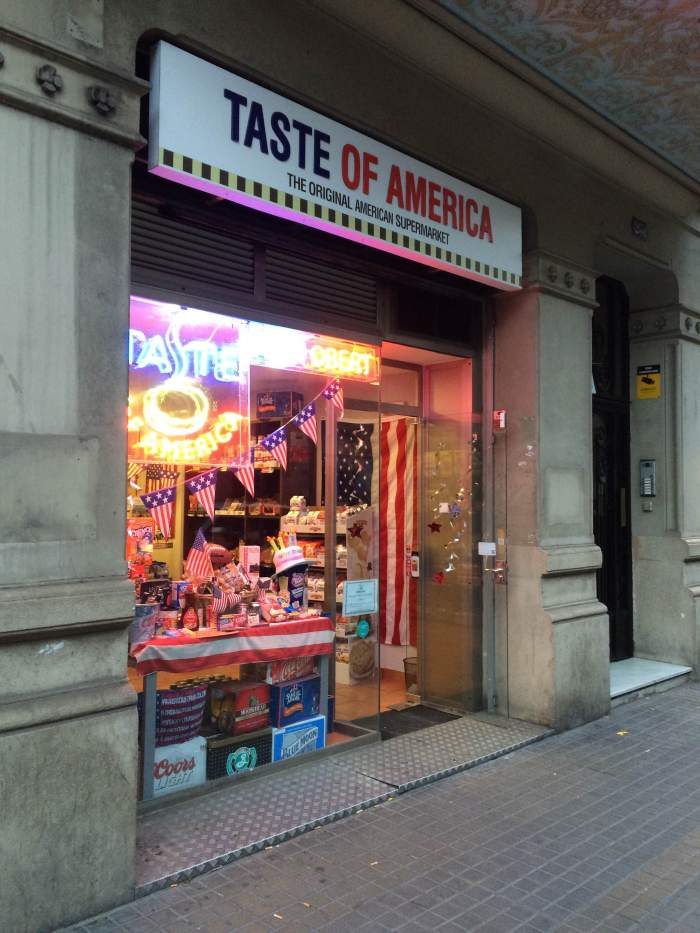 Found Peanut Butter: I found the much smaller equivalent to Wesley’s in Barcelona: Taste of America. Got myself a jar of Jif. I prefer Skippy but it’ll do. The cashier began to explain, in Spanish, that I was buying the extra chunky variation. I blurted out a “…sorry?” even though I figured out what he was saying and he laughed,“You’re American! Never mind!” It seems I blend right in here.

Trip up to Mount Tibidabo: We didn’t get to ride the old Tramvia Blau (blue tram) since it was a Friday. It’s only operational on weekends. That’s what I get for going to Tibidabo on my day off. BUT Tibidabo has a spectacular view of the city and you get to ride a funicular after having some gin & tonic at Mirablau bar halfway up the mountain. There’s a church and some rides at the top but the view is enough for the trip. Avoid the churros – not worth it.

Attended my first Barca game at Camp Nou: I’m more of a World-Cup-only football fan but it seemed wrong to not attend a game while staying in the home of FC Barcelona. With great seats thanks to friends at Fly-Foot, we got to see Barca’s win against Las Palmas with Messi’s injury in the first 10 minutes, Suarez’s two goals, and Neymar’s bad haircut. The energy in a stadium is so much better than watching behind a screen. 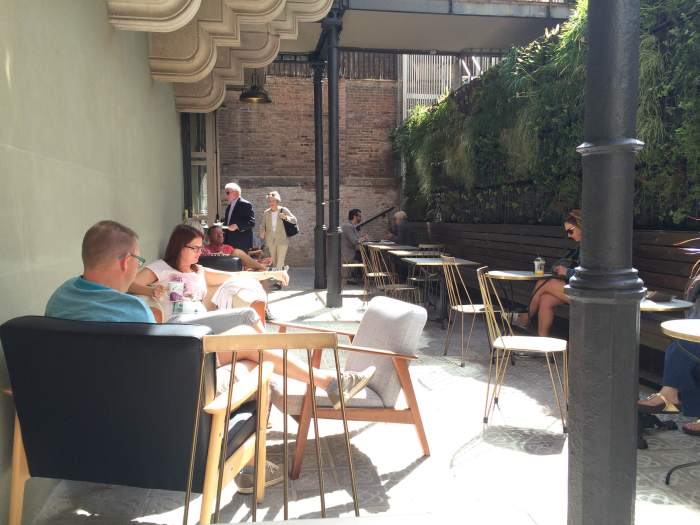 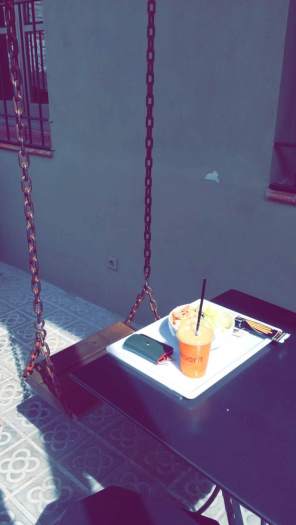 Faborit for Light Lunches: So far, this is my favorite lunch spot away from the office. They’ve got a healthy salad bar, fresh juices, pastries, loyalty cards, and a green-walled terrace. I got the swing chair last time I was there! I am a child. The interior is just as warm and inviting. Did I mention it’s at the ground level of Cadafalch’s Casa Amatller? #designerd

Went Flexitarian Two Sundays in a Row: Read more about this here.

Workout Track(s) of the Weeks

Fun, hip track to trot to. Not hardcore workout material but it’s a cheerful, summery tune. And the video was shot in Barcelona. 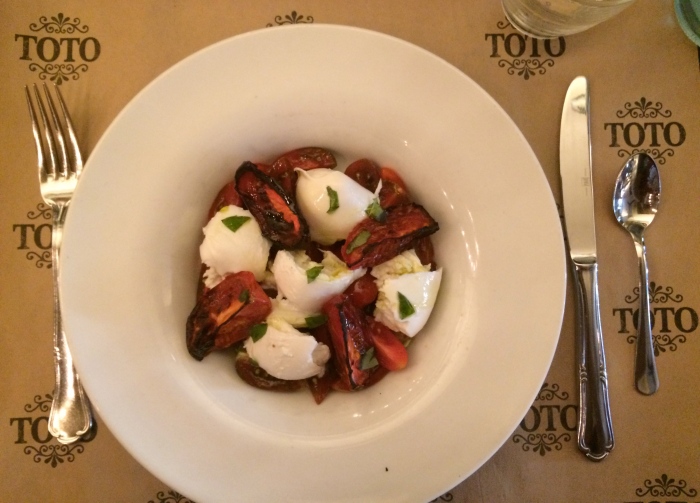 I’m in love with burrata anything. I’ve had burrata back home but I don’t know what it is about this español cheesperience. Maybe it’s the arugula or the sun-dried/seared tomatoes but I can’t get enough.