BETA, Beirut for the Ethical Treatment of Animals, is having a space crisis. Their shelter is running out of space for the increasing population of animals in need of homes. This increasing number is due to two factors:

There are no plans to expand the overcrowded shelter due to lack of funds. Since BETA is an NGO, it is mainly donation-based and an expansion would require a lot of the pesos that they use on operations, sterilization, deworming, food, and so on. The current shelter was never a shelter; it’s a refurbished pig farm that is home to over 400 dogs. That’s double the ideal capacity. Many dogs who were abandoned near the shelter end up at risk: hit by cars, tied to trees, injured/killed by other animals.

For the Lebanese, adoption is a new thing that people are not used to. I remember when I used to visit Beirut in the summers as a kid, Lebanon was not even a pet-keeping society. Now, the poo-covered sidewalks in Ashrafieh tell me otherwise. Cleaning up after your pets is a topic for another post though. People here are used to going to pet stores and forking over cash for purebred puppies. Sadly, there is a form of discrimination when it comes to full-grown mixed breeds. There is an archaic misconception that pure breeds are more affectionate, smarter, cuter, or just better pets. Trust me, that’s not true and I had a Persian kitten once.

Given, the adoption process at BETA is not simple but it’s coming from a good place. If you go to a pet shop, you’ll get a puppy no questions asked. BETA will make you reconsider whether you’re making the right choice when it comes to a pet though because they will tackle it from all angles. Having a pet is not like watering a plant. These animals are like children: they need vaccinations, they need check-ups, they need baths, they need attention. Just because you can pay the amount on the cage does not mean you will provide the non-monetary needs. BETA’s process makes you ask the right questions when it comes to making this kind of commitment. These animals have been through enough; BETA is making sure they won’t have a pet jumping foster homes. “We not only want dogs to find ‘homes’ but we strive to find them a home that would welcome them as a family member and not an ‘animal’ put on the roof or on the balcony.”

EXPATS PETS PROGRAM
The BETA team came up with a new program to rectify the current situation. Once again, we’re calling on the Lebanese diaspora and others abroad to help since the Lebanese living here aren’t keen on adoption. Personally, I would love to have a dog at home. However, like many other people who live in the city, I don’t have the open space or schedule that would be fair to a dog who needs love, attention, and fresh air. “This program aims to find animals loving and permanent homes abroad, while raising awareness on this forced immigration so as to encourage local adoptions.” Even the animals of Lebanon need to leave the country for better opportunities and a more secure future. Is this what we’ve come to? 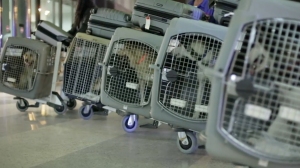 Dogs who are adopted via this program are accompanied by BETA members who pay for their own flight ticket. Those who have frequent flyer miles use them to cover part of the dogs’ tickets. The rest is collected from people who feel sympathy for the animals. BETA gives priority to senior animals, handicapped ones, or simply animals chosen by an adopter living abroad. They handle all the paperwork but the process depends where the animal is traveling to.

If you’re interested in adopting here or abroad, check out the website. If you can’t adopt but still want to help, you can send donations or stop by the shelter to give/receive some affection. Like their page on Facebook so you know when there are activities you can participate in too. For example, last Christmas morning, there was a dog walking group in Hazmieh. 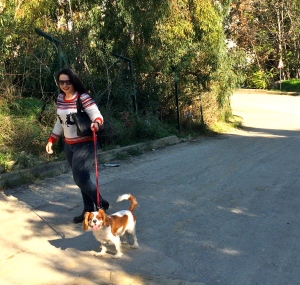 THEY STILL HAVE TO MAKE THE CUT

Adopters abroad still have to go through the rigorous screening process that BETA is known for. Just wanting a furry friend is not enough; adopters need to be suitable to care for one. International organizations carry out this screening process on BETA’s behalf. There have even been cases of BETA members’ friends carrying out interviews and follow up. It’s not always a happy ending though: there were some incidents where animals were not adopted according to BETA standards. A BETA volunteer flew to bring them back to Lebanon at her own expense.
DON’T PAY, CONSIDER ADOPTION

Adoption’s a win/win situation when someone can do so: you save that dog’s life but also allow for another dog’s life to be saved since there’s free space in the shelter. Of course, this doesn’t apply when the shelter can’t handle the lives they already have. If you’re looking for a new pet anyway and have made the conscious decision that you can care for another being, I encourage you to adopt. Instead of buying a pet from a pet store and financing unhealthy breeding practices, stop by the BETA shelter. These lives shouldn’t be bought, they should be loved. 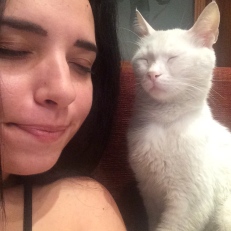