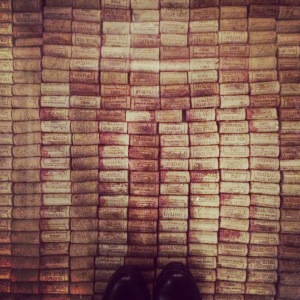 This year, on Lebanon’s Independence Day, I (along with my dad and sisters) was dragged against my will to a “social function” organized by my mother: a Thanksgiving lunch up in Bhamdoun with her American lady friends. I have nothing against social functions, I just prefer to spend my rainy Saturday mornings tucked in bed until noon. Had she told me that we were heading to the home of Chateau Belle-Vue, a hidden gem in Bhamdoun, I wouldn’t have been so reluctant. And I wouldn’t have worn high-heeled boots and a dress either.

Naji Boutros, Bhamdoun native, and Jill, his American wife, make up the couple that started Chateau Belle-Vue back in 2000 with 3 plots of land. Now with 130 plots, new vineyards are planted every year as they try to keep the lands of Bhamdoun within the 10-12 families of the village. They lease it to fellow historic “Bhamdounians” because they want the owners to have this connection to the soil. “Part of our motivation is that people stay attached to their heritage,” says Jill. The other part, she says, is that there would be enough agricultural momentum to stop urban development. Bhamdoun is desirable real estate since it’s basically a mountain home that’s a 20-minute drive from the city. “We don’t want people to build in the valley; it was always vines and it should always be vines.” Chateau Belle-Vue gets its name from “Hotel Belle-Vue”, the first Bhamdoun hotel that was owned by Naji’s family.

Chateau Belle-Vue was bought from the French government 5 years ago through a bidding process. It used to be the summer residence of the French ambassador to Iraq and Jordan. and also doubles as a bed & breakfast with a common space and 7 rooms, each named after a kind of wine. The common space is used by the community for yoga sessions and serves as a public library. Le Telegraphe, the Chateau’s restaurant that opened 2 years ago, used to be the concierge’s quarters. It’s named “Le Telegraphe” because the location was a telegraph broadcasting “La France Libre” before World War II.  Chateau Belle-Vue aims for “organic and biodynamic agriculture.” The vine terraces of Bhamdoun have always had quite the reputation for good grapes and the village was made up of 4km of terraces back in the day. 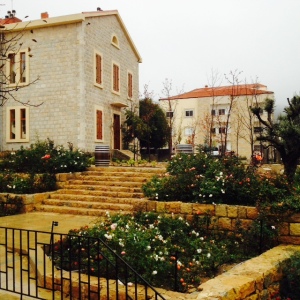 All of Chateau Belle-Vue’s wines are dry wines. It’s placed in French oak barrels for two years, allowing for a red fruit and aged oak intense taste. All grapes are hand-picked and the wine is handmade. No additional yeast is added to the fermentation process. We had a 2007 La Renaissance, which is a blend of 60% Merlot and 40% Cabernet Sauvignon. It was made up of 4 varieties of red grapes from 2 different parts of the valley. The winery is actually run by a team of women. It wasn’t on purpose but that’s just what ended up happening. According to Esperanza, the Spanish vineyard manager, the grapes of the Merlot that are grown in the northeast part of the valley differ from those in the southwest – that along with other factors (altitude for example) can affect the blend’s final taste. “With wine, everything is about balance,” she says.

The Chateau Belle-Vue wines are sold at the winery and at Vintage in Saifi Village, Beirut. Members of the Chateau Belle-Vue wine club (kids too) can come up during the harvest (August to October) to pick grapes and help in the wine-making process, making it a communal effort to create great wine. When a new wine is launched, members are invited to come try them and they get special delivery privileges.

One thought on “The Little Winery of Bhamdoun: Chateau Belle-Vue”