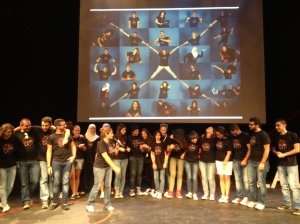 Seeing that TEDxLAU was held on the 7th of this month, I am a bit late posting this. However, I still have a bruise from donating blood at the DSC stand that was there so it hasn’t been THAT long. Yes, this is my so-called “logic,” woo!

1. “People are made of pages…You get to pick the words that your story is made of” – Elie Kesrouani

A storyteller who gave me goosebumps, Elie had a somber tone throughout his talk but still touched on a lot of things that ring true. He stressed on the importance of reading, cherishing slow moments (short moments that translate into long memories), and how one shouldn’t playfully brush off warning signs when they’re right in front of you. The last one was the moral of a story about a clown on stage who was trying to warn a cheering audience about a fire in the theatre; they took the warning signs as entertainment until it was too late. Very relevant to our region today. He also touched on the lessons that reading can teach you indirectly. Other than learning new words and stretching your imagination, it can make you accustomed to being alone, making the relationships you have much stronger.

2. “We may be different from the outside, but inside we are all one color” – Hady Sy

Designer Hady Sy left Lebanon during the war in the midst of his studies at LAU (then BUC) and ended up working in NYC. He’d done work with all the big names (Lagerfeld, Vogue, etc) but once 9/11 had occurred, he had witnessed too much bloodshed. He flipped his focus and began doing more conceptual work revolving on that exact subject: blood. He’s back in Beirut because the Lebanese Ministry of Culture offered him an art residency for the installation “One Blood.”

3. “Chairs are not meant to sit on, they’re meant to stand on so you can see the whole picture & go back down and serve” – Christine Arzoumanian

Pretty self-explanatory. Get off your high horse, lend a hand, and make a difference.

5. “Don’t be a citizen journalist,be a citizen diplomat & fight for a better Lebanon, the one you deserve.” – HMA Tom Fletcher

The UK Ambassador is known for being a huge user of social media and incredibly active on Twitter. He’s also really friendly – I mean, we talked about Creamfields…seriously. Anyway, he said that your “superpower” is your smartphone and it should be used to start a conversation and march for a better Lebanon – the “frontline of coexistence.” When discussing the issue about Lebanon’s brain-drain, he had a positive way of looking at it: due to the fact that so many Lebanese leave the country, it creates one of the best global networks for us as a whole. Instead of it being a bad thing, we are connected to people all over the world. What I appreciated the most was that he seemed very interested in the youth, our capabilities, and our minds.

6. “The ‘Arab Disease’- you buy everything but build nothing and don’t industrialize” – George Nasr

Unfortunately, this region does suffer from over-importation rather than having their own sources of production. Other nations are heading in that direction but Lebanon has a long way to go when it comes to industrialization.

This quote struck me as very valid. Too often, we try to get a message across in such a convoluted way that it is lost in translation. Making information more accessible does not mean that you are striping it of its intelligence or significance, it means it will reach more people and cause more of an impact. A good message that doesn’t get past the radar is a dud in the water. Di3ano.

8. “Stop making decisions about what we do and start making choices about who we are” – Jade Saab

Jade, co-founder of the new job platform Achieve, is spot-on when it comes to determining your path in life. It’s not about what you do but rather who you are. There is so much emphasis placed on what you do that who you are becoming gets pushed to the sidelines when, in fact, that is one of the most important parts of building a career: discovering who you are through experiences.

9. “The show will go on as an act of resistance” – Reine Azzi

I already quoted this in a previous post and it pretty much sums up what I was trying to say in a nutshell. Reine said it was inspired by Tom Fletcher.

A project for the future of Lebanon – an excerpt taken from Tom Fletcher’s blogpost:

“We want to start a conversation about Lebanon 2020. To lift debate beyond the year ahead, important as it is. Stability yes, but also growth and reform. A focus on the factors that unite rather than divide. We think that new groups, often disenfranchised, should be central to this conversation: business, civil society, youth. We must of course learn the lessons from the past. But we cannot make progress solely by looking in the rear view mirror.”