There are so many reasons for people to be angry lately. Irritation is in the air along with the humidity, the power cuts and the impending addition of Dwight Howard to the Lakers. Yes Kobe, you are going to be in his shadow and LeBron, you will never see another ring because the Lakers are now the Avengers of the NBA. Here are some breathing-in-a-brown-bag ways to relax your nerves without inflicting pain on anyone even though, deep down, everyone would love to do this once:

Create a character (or a few depending on your level of rage) and name them whatever you like. Feel free to make them resemble someone who’s been a source of annoyance to you. Your colleagues, your boss, that woman that took the last box of Raisinets, the guy who keeps violently blowing his nose right next to you – be as realistic as possible because it makes what comes next that much sweeter. Once you’ve moved your Sim into a nice cosy home, proceed to terrorize their artificial life. Make them order pizza and then delete the door on their home – they will crawl into the fetal position on the floor and cry. Make them go for a swim and then delete the ladder – they will rack up fitness points until they probably die of overexertion. Get creative. In reality, this hurts no one. Just don’t run around telling people how much fun you had last Saturday night torturing virtual people on your computer. You’ll look like a disturbed sadist and no one liked Buffalo Bill.

Become the world’s most skilled human shredder. Not shredding humans, just shredding in general. Restaurant placemats are always good for this especially if that’s where you find yourself on the verge of nuclear meltdown. Where are my cheese fries? Why can’t I have game like Barney Stinson? He looks like the offspring of Sting and Julien Assange – How does that work? Stop asking me about my future. I DON’T KNOW WHY I LIKE RACCOONS. Where are the fries? Rip your frustrations into tiny smithereens until they’re just a pile of fibers. If you feel bad about wasting paper, collect it and donate it to a pet shop so it can be used to line the cages of poop-happy bunnies. Bubble wrap is harder to come by but works best when twisting it like you’re wringing out a wet towel…similar wrist movements that would be used for the decapitation of a Barbie doll.

It’s quite self explanatory. It might be hard to do if you don’t have younger siblings. Even if you do, they may not appreciate you going King Henry VIII on their toys. Therefore, replace the head with something else like a ping pong ball or a Mini Babybel. Maybe you should just replace the whole doll – then you can go all out and make the first one into a Mattel s’more at a bonfire.

Choose your favorite loud angry song. “Sing” it alone in the car with the windows up. Scream your heart out. It actually doesn’t even have to be angry, just something with a high-pitched was-he-kicked-in-the-berries chorus. You must sing along or this is completely pointless. Suggestion: 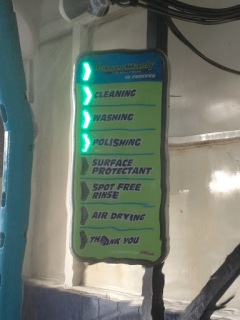 If in Lebanon, go to an IPT station that has the LASERWASH machine where you get to drive through an instant car wash. It takes 15 minutes and you get to stay in your car and watch it all happen. This is not the most fascinating thing since sliced bread but it’s still fun to watch all the foam and pressurized water go everywhere while you are safe inside. And they have multicolored polish that splats all over the windshield. If you enjoy color or have an unnatural level of natural stimulants in your system (no, not pot – if you’re just amused by “simple” things), you will clap and squeal. Bring a fun song for the experience. You should have a soundtrack for all things in life.

Do not use this machine if you’re sunroof is broken. It happens, okay?

6. Listen to This, on REPEAT

Listen to it over and over until you’ve memorized the words and you’re laughing at how ridiculous you are. It will be stuck in your head and you will piss off everyone else because your incessant humming will make it stuck in their heads too.

Another example: learn from one of the best crazy people out there. In this film (What Women Want), Gibson’s character has hit a wall after his promotion goes to a woman. Play this at 28s.