Another rendition of Pet Peeves 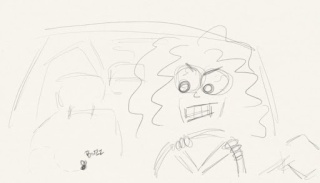 1. Like a scene from a horror film where the demon child keeps appearing even after you’ve sliced and diced his possessed body, there is a wee insect taunting you while you drive. You can’t help but focus on it’s minuscule carcass as it weaves and bobs into your windshield repeatedly. Even with the window open, it seems to have lost its internal compass and stays bouncing on the dashboard like those carnival whac-a-mole…moles.

2. YES! Your favorite song of the week just came on the radio and you’re so IN.THE.ZONE. You could basically have your Saved-the-Last-Dance audition while sitting there in the car and nail it with just the rhythmic neck movements you’re doing. You don’t even have to dance because you’re swimming in awesomesauce. And then it happens. The reception goes to shit because you’ve entered some shady area or some politician decided to crap on your dreams. You were thisclose to being a choreographer. Gone.

3. Leather Seats. If you don’t have them, then be glad that you were discounted one peeve and sympathize with this imagery: In the summer months, you voluntarily sit on a bunsen burner and then strap yourself down with a belt of fire. In winter months, you are surprised that your ass doesn’t get stuck to the leather a-la-Harry-Dunne. Let’s face it, Lebanon only has two seasons.

4. Your right leg starts twitching. In the middle of the highway, your muscle decides now is the perfect time to spasm. It’s not like you’re operating heavy machinery or could die. The people in the car behind you are wondering why you’re braking to the beat of underground house.

5. The new air freshener you got is wonderful. The smell of gardenias is so sweet, you could’ve been trapped in a perfume bottle and felt less fragrant. But then you realize that air freshener’s scent is getting into your nostrils faster than a Western country’s internet connection. It’s in your clothes, in your hair, in your blood. As you pull into the gas station, you inhale that octane as if you just surfaced for air from Mariana’s Trench.

7. You’ve got just the combination of up/down/forward/backward so that the driver seat is exactly where you want it. The steering wheel is at the right position, the pedals are right under your feet, it’s yours. Until a parking attendant/car wash/any-other-person-of-a-different-size messes around with your settings so they can drive. You try to get it back to the way it was. It’s not the same. She’s changed. You don’t know if you can do this anymore.