Last weekend in Dubai, I found myself lounging on the grass two mornings in a row. The fact that I traveled over 2000 km just to be lazy under the sun listening to podcasts was a tad frustrating. I was in what is commonly referred to as a desert, and yet, it seemed like they had better public green spaces than our own “lush” Lebanon. In a country like ours, with weather like ours…why don’t we have parks EVERYWHERE? The last time I hung out on the grass like that, I was still an AUB student sprawled out on the Green Oval.

Although partially closed off due to the construction of a water canal, Safa Park is very charming and chill. With a spectacular view of Downtown Dubai and plenty of mini playgrounds surrounding a little lake, there are shady spots scattered around where you can just set up camp and hang out. I was there on a workday so it was pretty vacant. Schoolchildren were there on a field trip; their teacher was teaching them about greenery and plant life. “This is a BROWN leaf. What’s that mean?”, she asks the little people. “IT’S DEAD!” they all shout. And then she told them to cross it off their checklist-clipboards. It was all very amusing to see kids that enchanted with the natural world. 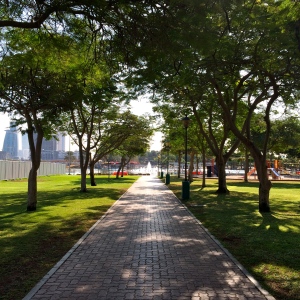 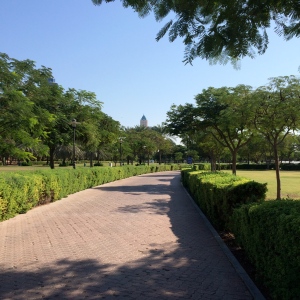 Home to Ripe Market, the organic farmer’s market of the UAE, Zabeel was pretty impressive. Not only were there people from all over and of every age group, there was also a big variety when it came to the actual stands present. Mini pancakes, Lebanese street food, Raw Coffee, crafts, and products. And when you’re done perusing through the market, you can go find a spot under a tree. Although Dubai is nicknamed “the city of Malls,” I found it ironic that they have their farmer’s market in a park and we have ours in a shopping district (Beirut Souks).

Entrance was 5 dhs (~$1.37)
BONUS: Both parks have jogging tracks that run around their perimeter (padded asphalt, stretching stations, distance marks, the works). 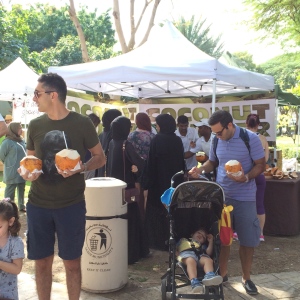 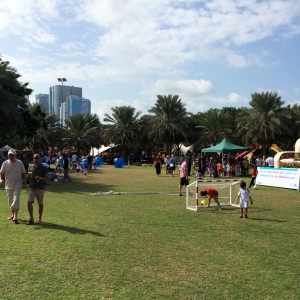 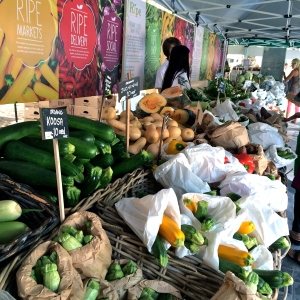 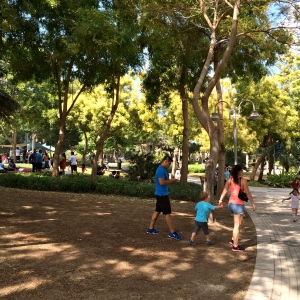 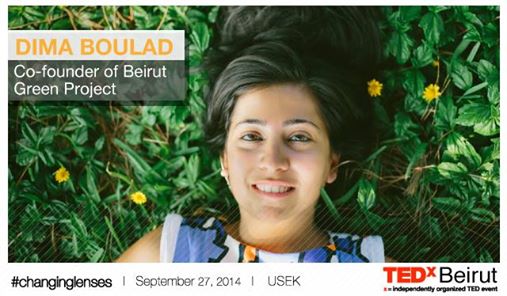 “The conversation began 4 years ago,” says Dima Boulad of Beirut Green Project, an NGO that focuses on public green spaces in the literal sense – not a green lifestyle that involves recycling, but rather the lack of green parks in our urban landscape. After carrying out public interventions highlighting the need for public green spaces, it was clear that a movement should be formed and thus, the BGP was born. The team came together gradually in parallel with the planning efforts of new interventions.

When it comes to making an impact, BGP uses more of a guerilla strategy. “It’s much more efficient to start from the bottom and create small change on a one-to-one scale that will spread from one person to the next,” says Dima. Rather than going straight to the top and trying to behead the hierarchical monster, using baby steps to make the cause stronger is more effective. “It’s a longer process for sure, but this is how real change can happen.” Working with the system takes time but is advisable for long-term change. However, when there is a violent assault against your rights occurring, you need to take action in an unconventional way. BGP hasn’t used an aggressive approach with municipalities and, as a result, their ideas are not rejected and the officials are open to discussions on new initiatives. Nadim Abou Rizk, Vice President of the Beirut Municipal Council, has been cooperative with BGP efforts and is one of the most concerned members when it comes to the parks of Beirut.

All funds needed for their efforts have been from their own pockets or dependent on sponsorships and donated services. A partnership between BGP and WonderEight formed after AUB’s Talk20. WonderEight, an environmentally-friendly design studio based in Beirut, created their identity, guide, and additional design elements as a pro-bono company CSR project. Such community-based collaborations are what our country needs to get these types of activities off the ground: separate entities coming together for one goal for the common good of the society as a whole.

“For example, an NGO can propose a space by conducting a study of a tiny area in a neighborhood that has 3 schools – a place that is in need of a space where kids can relax on their way home from school. The municipality can then get the area ready and clear the location, then a private company comes and funds the remodeling and planting. The neighborhood people can come and participate, creating a sense of ownership of spaces. This allows people to feel like it’s their space.”

Dima believes that once you create a sense of ownership with these spaces, people will protect and respect them. By including the people in the process from the start, the Municipality will be giving citizens what they want and the people, in turn, will want to preserve what they have had a part in creating.

When discussing Horsh Beirut and the leading rumor as to why it remains closed,* it’s a bit like the logic that claims abstinence is the best contraceptive. You can’t cut people off from the park claiming that people do not know how to respect public green spaces yet expect them to simultaneously learn park culture without any parks to do so in. How do you learn how to treat a park if you don’t have one to begin with?

There are other rumored reasons as to why the Horsh is still closed ranging from the need for proper security guards, caretakers, and maintenance teams to it being located in a sensitive spot bridging neighborhoods of varying religious beliefs. The latter reason is the most infuriating in both Dima’s and my opinion. It should be a reason for opening the park rather than keeping it closed because it will blur the borders and allow people to socialize sans sect. Dima says, “they’re afraid that it will create conflict and tension. On the contrary, there is conflict and tension because there is no public space. If we had spaces, people would mingle and that fear of the other would go away.”

With the many urban developments happening in our city, we cannot always blame the developers and investors. Dalieh, Ramlet el Baida, Fouad Boutros Highway. All of these developments can be halted and revisited if we, as a combined force, stand up and say no. The Jesuit Garden in Geitawi was a small victory that wasn’t publicized enough. We all heard about its impending conversion into a parking lot; however, we did not hear about how that plan was thwarted once the neighborhood came together to say no. This is evidence that the people can make a difference when they want to. We should not use “Eh, this is Lebanon” as an excuse for being passive. You must hold others accountable for violations of your rights as Lebanese citizens.

“If every person took one small step without thinking about whether or not it was making a difference, together it will create something. You have to look at the whole picture. It’s rare to see the results immediately. Each person has to do their small part and eventually it will create change.”

Up next for BGP is printing and distributing the Beirut Green Guide while educating schools about public green spaces and equipping students with their own copies of the Guide in order to keep the message going. For this month though, Dima has been invited to speak at Arq Futuro‘s Parks of Brazil event in Sao Paolo and will be touring South America for the next few weeks to get some greenspiration, as I’d like to call it. To keep up with BGP’s developments, check out their blog and Facebook page.